a signature Brazilian cocktail made with cachaça, sugar, and lime.  The Caipirinha has been reinterpreted with vodka, as well as many other white spirits in place of cachaça, but it is cachaça that distinquishes the Caipirinha from other similar lime and spirit cocktails.

Cachaça, otherwise known as Pinga or Caninha, and by volume, the most produced spirit in Brazil is white spirit and like rum, is made from a base of sugarcane and is roughly similar to rum, even more to rhum agricole, but with a "cleaner" more fruity flavor, generally.  Rum is generally made from molasses, a by-product of sugar refining, whereas, cachaça is derived from the fermentation of fresh sugarcane juice pressed from cane collected sometimes using a method of harvesting that requires burning and the resultant alcohol is then distilled. Thus, cachaça imparts a grassier, sometimes smokey flavor to the Caipirinha, also spelled, "Caipirina".  Furthermore, cachaça is enhanced by the native woods in which it is aged in both color and flavor.

According to popular history, the Caipirinha had its beginnings in São Paulo, where a recipe of lime, honey, and garlic carried in cachaca was made as a remedy for the flu during an epidemic in 1918.  Caipirinhas are still administered for this purpose today in much the same way a whisky toddy is administered against the flu in colder climes.

The term, “caipirinha” means something akin to “yokel” or "country girl." 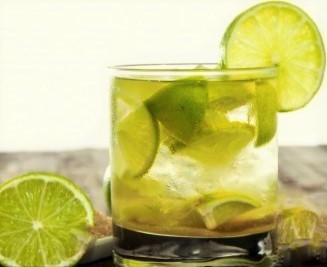 To make a Caipirinha:

1.    In an Old-Fashioned glass muddle the lime quarters and sugar, dissolving the sugar and releasing the lime’s essential oils.

2.    Add cubed  ice to loosely fill the glass (larger cubes will produced a less watery cocktail and crushed ice will produce a frothier one) and cachaça, and then stir to evenly distribute muddled lime syrup or put the ice in a shaker along with the lime syrup and cachaça and shake to deeply chill.

Note:  Alex Baker wrote in to say, "There should be no lemon juice added as the crushed limes produce the citrus juice.  The oils in the skin of the limes also give the drink its distinctive character.  The ice should also be crushed ice or the cubes shaken with the ingredients to break them up and served with the drink."