The torta, simply a Mexican inspired sandwich, traces its roots of influence to similar dishes from various other countries. The main differentiating component of tortas, which are etymologically similar to tortillas, is the bread, which is referred to as either a telera or bolillera, both of which are soft on the inside with a crunchy or flakey outside. The ideal bread is defined by “having enough texture to hold up, being soft enough to bite and large enough to contain a plethora of ingredients” (“History”). The bread, which resembles a French baguette is evidence of the French influence on tortas and could have been made present during France’s 1860s occupation of Mexico.

Although corn is the staple crop used in the production of tortillas, wheat, which was brought over by the Spanish during the colonial days, became a regular component used by bakers. Though wheat has been present in the Americas since the 1500s, it was not until French occupation that Mexican bakers actually began using the technique used for teleras and bolilleras while baking bread.

It is said that the inventor of tortas, however, is Italian Leonardo da Vinci who sought to surprise his patron by placing “a piece of bread between two hard pieces of meat as hard as cobblestones and covering the entire dish between two larger pieces of bread, ” thus creating a rudimentary torta (Alaniz). The purpose of hiding the ingredients underneath the bread is to hide what the patron may find unsavory because of lack of food resources back during times of widespread poverty.

The variety of today’s tortas has far surpassed the plainness of da Vinci’s dish. Chicken, chorizo, beef, pork, and milanesa (breaded steak) are some of the more common meats used to create tortas.

These sandwiches are most commonly prepared by and sold by street vendors and food carts during daily life and especially during fiestas and other celebrations. Because they are typically sold during exciting, vivacious times significant to Mexican culture, the tortas match the atmosphere with bold flavors and unique ingredients, symbolic of the wild, vibrant Mexican people. Tortas are sometimes sold in restaurants and torterias, but the Mexican public is the true maker of tortas adding their own flavors and ingredients depending on the preferences of the region. 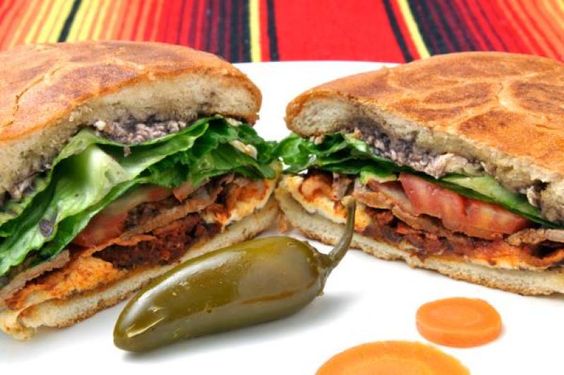